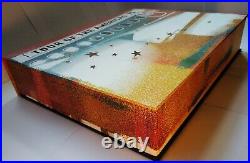 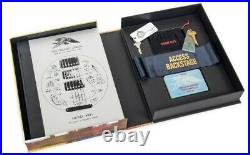 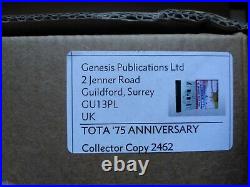 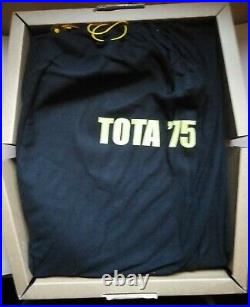 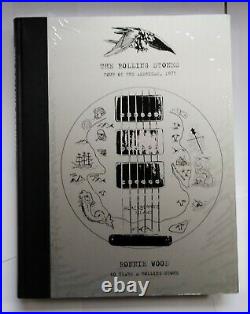 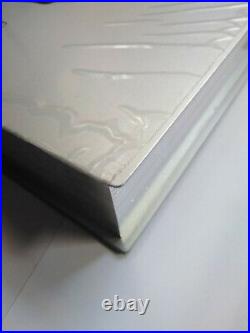 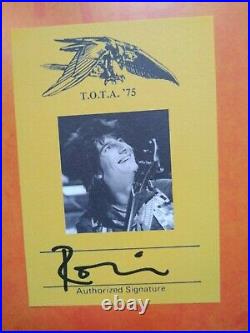 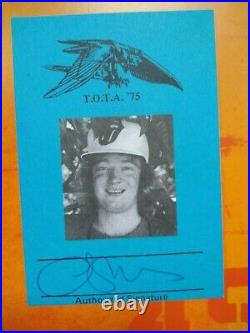 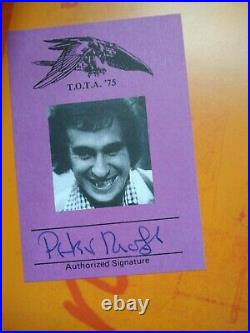 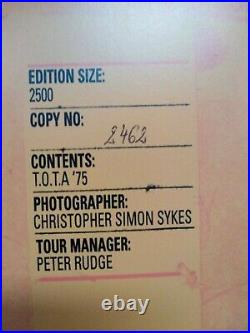 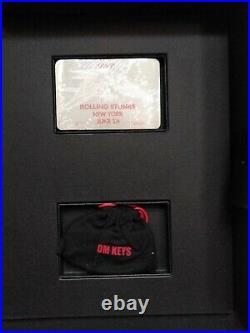 You are looking at The Rolling Stones tour of the Americas T. A 1975 “The Anniversary Edition”. Only 400 copies will ever be created. Published with The Rolling Stones, this issue is Specially signed by Ronnie Wood. Released by Genesis Publications, anyone who knows about this company or have collected any of there books from the Genesis Publications collections will know this name represents Quality and the highest standards. Condition is “New” It will Dispatched by courier signed this item is over 8kg! I post to Uk only. I always post the same day if possible, and always send you proof of post. TOTA’75 is created in a limited edition of 2,500 signed copies. Just 400 of these rare books were made into special Anniversary copies, as well as being signed by tour manager Peter Rudge and diarist Christopher Simon Sykes, These copies have been additionally signed by Ronnie Wood. This book is incredible. It takes me back to my first Stones tour. Complete with a new binding, the book’s new cover is designed to Ronnie Wood’s approval, inspired by his iconic Zemaitis guitar. Its aluminium cover is silkscreened with beautiful engravings from the guitar’s metal disc front. Over 400 silver-edged pages are quarter-bound in leather and housed in a protective solander box. The’Starship’ is silkscreened onto the box, with lenticular images of the Stones appearing in the aircraft’s cut away windows. In 1975 The Rolling Stones documented their mammoth 40-show Tour Of The Americas – T. A’75 – in its entirety. A trusted friend and confidante, Christopher Sykes, was brought in to create a visual and written record of their journey. The Rolling Stones wanted to make a diary of their forthcoming tour so Christopher joined the 40-show tour at the Stones invitation and his role was to document the tour in its entirety. He travelled with the band in the specially commissioned Starship and took a wealth of photographs, most of which are unseen. Along with capturing photography, he kept a diary and held onto every piece of tour memorabilia he put his hands on, including backstage passes, tour newsletters and even hotel room keys. The photographs, diary entries and daily newsletters give you the opportunity to experience being backstage, pre-show tuning with Keith and Ronnie; travelling onboard the Starship; the idea of elephants as extra security; crew parties; the stage set-up; visiting Niagara Falls with Mick; Stus birthday cake fight; Mick borrowing Lisa Robinsons knickers for a show; Ronnie and Keith being charged with reckless driving and possession of a knife, and much much more. Page size: 360mm x 280mm. Ronnie Wood, Christopher Simon Sykes and Peter Rudge. Quarter bound in black leather and screen-printed aluminium, with silver tooling and page edging. The handmade solander box features a silkscreen image of the’Starship’ and silver foil blocking. Lenticular images of the Stones appear in the aircraft’s cut away windows. Hotel room keys and the backstage passes. The tour’Access Backstage’ silk armband serves as a pull ribbon. The item “The Rolling Stones T. O. T. A 1975 Genesis Publications Anniversary Edi 400 copies” is in sale since Monday, July 26, 2021. This item is in the category “Music\Music Memorabilia\Artists/ Groups\Rolling Stones”. The seller is “def.leppard.no.1″ and is located in Ramsgate. This item can be shipped to United Kingdom.