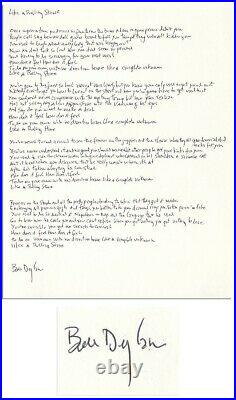 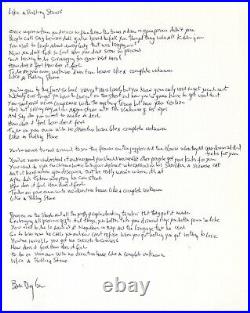 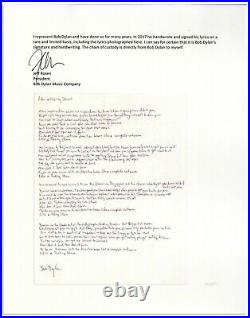 One of the most covered and influential songs of all time, “Like a Rolling Stone” lyrics are here handwritten and signed by their creator, Bob Dylan. With this song, Dylan reinvigorated his passion for his own work and fully embraced rock music as a complement to folk. Clocking in at 6 1/2 minutes long, the song was initially thought too long to be commercially successful, until listeners in the mid-60s harassed radio stations to play it in its entirety. “Like a Rolling Stone” has been covered by Jimi Hendrix, The Rolling Stones and countless others, and inspired even more. Bruce Springsteen first heard it when he was 15 years old: on came that snare shot that sounded like somebody’d kicked open the door to your mindThe way that Elvis freed your body, Dylan freed your mind, and showed us that because the music was physical did not mean it was anti-intellect. He had the vision and talent to make a pop song so that it contained the whole world. He invented a new way a pop singer could sound, broke through the limitations of what a recording could achieve, and he changed the face of rock’n’roll for ever and ever. Handwritten lyrics read in full. Like a Rolling Stone. Once upon a time you dressed so fine threw the bums a dime in your prime didn’t you. People call say beware doll you’re bound to fall you thought they were all kiddin’ you. You used to laugh about everybody that was hanging out. Now you don’t talk so loud now you don’t act so proud. Bout having to be scrounging for your next meal. How does it feel How does it feel. To be on your own, with no direction home like a complete unknown. You’ve gone to the finest school all right Miss Lonely but you know you only used to get juiced in it. Nobody ever taught you how to live out on the street and now you’re gonna have to get used to it. You said you’d never compromise with the mystery tramp but now you realize. And say do you want to make a deal. How does it feel how does it feel. To be on your own with no direction home like a complete unknown. You’ve never turned around to see the frowns on the jugglers or the clowns when they all came down and did tricks for you. You’ve never understood it ain’t no good you should never let other people get your kicks for you. You used to ride on the chrome horse with your diplomat who carried on his shoulder a Siamese cat. Aint it hard when you discover that he really wasn’t where it’s at. After he’s taken everything he can steal. Princess on the steeple and all the pretty people drinking thinkin’ that they got it made. Exchanging all precious gifts and things, you better take your diamond rings, you better pawn’em babe. You used to be so amused at Napoleon in rags and the language that he used. Go to him now he calls you and you can’t refuse. When you got nothing you got nothing to lose. You’re invisible you got no secrets to conceal. Single page measures 8.5″ x 11″. In near fine condition. With COA from Jeff Rosen, Bob Dylan’s manager. The item “Bob Dylan Signed Handwritten Lyrics- Like Rolling Stone” is in sale since Thursday, January 28, 2021. This item is in the category “Collectibles\Autographs\Music”. The seller is “n8sautographs” and is located in Los Angeles, California. This item can be shipped worldwide.